The journey has been long but I have arrived. I am calling this series “An Apple A Day”. After nine faithful years to Andriod, my journey has brought me to Apple’s doorstep. Now don’t get me wrong moving over was one of the hardest things I have ever done… or so I thought.

My career has brought me to a new place altogether with changes in jobs and roles in the last year and I have tested a lot of different platforms to see which would best fit and frankly I’m tired of carrying around a backpack with 4 laptops. My goal was to find out if I could use an iPad as a daily driver, here were my criteria.

1. Function: I am engaged in many speaking events and I needed this to be the only device needed for doing speaking sessions or conferences.

3. Daily Task Performance: Could I work in my office environment without a problem and maintain most of my day to day tasks like email and such.

4. Integration: Would it integrate with all the tools and software I’ve already come to love. (Plex, WordPress, Synology, DropBox, etc.)

5. Internet Accessibility: Does it have the ability to get on the internet from almost anywhere.

6. Elimination: Can it eliminate or reduce my dependency on having physical access to multiple laptops.

So, obviously, the first step to this journey was to make the purchase commitment. Based on the feedback from my fellow Agile coaches, peers and my wife I decided that the iPad Pro 12.9 was the best fit for me. Nothing less than the best. I also purchased AirPods and an Apple Pen as the demonstration of them at the apple store were an instant sell and I’ll tell you why in a minute. 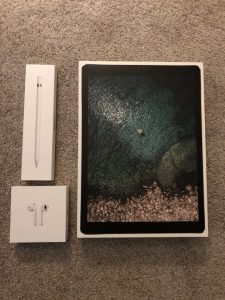 First, after opening my so brilliantly white packages it was almost as if all the accessories were long lost, friends. Everything flows together so seamlessly it’s almost unbelievable that really was all there was to it. After setting up the iPad, which was easy and straightforward, I opened my AirPods and to my surprise, the iPad noticed they were near and asked if I wanted to pair and that was that. No Bluetooth search and pair fumbling just simple and intuitive. This made me wonder why isn’t everything this simple?

Next, I had to pair the pen, I held it to the screen like some sort of magic wand waving it around hoping the Apple gods would smile upon me again but no such luck. Luckily, I read the instructions and it was a simple plug into the side of the iPad and bam a message telling me it was paired. Again, simple and fast, why does Android have to be so complicated?

OK, so the setup was amazing and no wonder my wife raves no matter how much crap I give her but now it was time to find out if all my old productivity and games were available for Apple. This one cost me a fair bit of money as Humble Bundle has had me spoiled with my over 600 game catalog for Android. Clearly, 9 years on Android is going to have its advantages. Surprised yet again almost all apps are equal or better on the iPad, feature, and function. Here are a few I installed and why:

Now, let this serve as a guide to those who are interested in the crossover that doesn’t want to make the $1220 – $2500 investment that I have just to find out if it works for you. Feel free to leave messages in the comments on things you want to know about specifically and I’ll check them out and get you an answer.

Click Here for the Next Installment in this Series